I’m ashamed to say that my Scan’n’Cut spends a lot of time sitting gathering dust. I love it, but it’s a bit too clever and daunting for me, and the mats lose their sticky very quickly (perils of being owned by a cat, his hair gets everywhere) which has cost me a few projects to my consternation. Most of what I use it for is cutting mats and layers, it’s great being able to cut perfectly with my own increments, not ones dictated by die size.

Every so often I have good intentions about using it more, often when I see it being demo-ed on Create and Craft. Today was one of those days.

First, I drew for the first time. I chose three images from the Glitz and Glam USB which I fancied as stamped images and set it to drawing them on plain white card. I tried the colouring option on the plane, it’s covered a lot of the detail link although paler than the original lines so they’re still visible. At first I was unmoved but looking at these again I am increasingly keen on the effect.

Next, I thought I’d try emulating cards I like which focus on one large sentiment, so I chose two of the preset words – Happy Birthday and Noel. I shrank them slightly from the set size, then cut them from Kanban red mirri board.

As I was removing the cuts from the sticky mat, I realised that I real like the negatives too, so played with masking tape to keep the bits in place ready to be made into cards.

The cut outs, I mounted on Kanban foiled sentiment card with complementary themes – more birthday words and presents. I kept the cards themselves very simple to really show off the sentiment and the shininess. 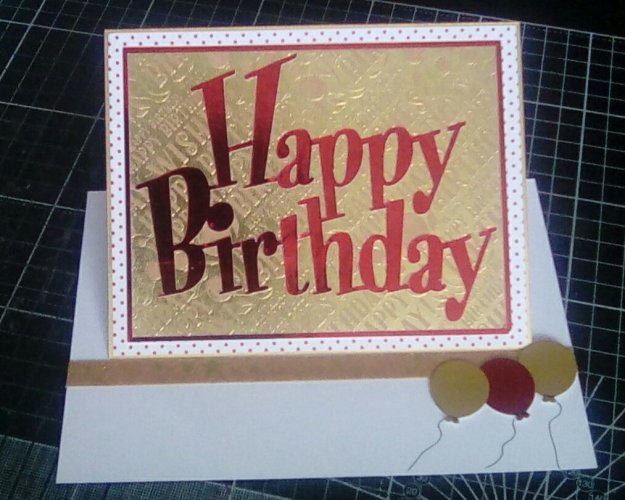 A very simple easel card. I mounted the Kanban sentiment card on a piece of white paper with red polka dots and then layered this onto a piece of gold card. The stopper is a scrap from the Kanban foiled card and three punched balloons.

I was chuffed with these, the big bold sentiment appealed. I had a bit of time left, I had intended to play with the machine more, but I used the negatives instead. Still simple and very shiny cards, pretty though.

7 thoughts on “Experiments with my Scan’n’Cut”